The Pacific Southwest Intercollegiate Choral Association was founded in 1922 by the California Institute of Technology, Pomona College and Redlands College. Initially the association was comprised of separate men's and women's choruses until sometime in the mid 1940's when mixed voice choruses became the norm. The association's annual event was a choral contest complete with silver cups or bowls awarded to the winner. Howard Swan, conductor of the Occidental College Glee Clubs from 1934-1971, indicated that one could always predict the winner by who the three judges were. The annual contest continued through the 1930's. As additional institutions became members of the association, Swan objected to the competitive aspect, and said he would withdraw Occidental from membership if the format was not changed. The association voted in 1942 to host a festival rather than a contest.

In the early years, all the choirs would gather at the host school for a meal before the evening's concert, adjourning to warm-up at the appointed time. The festivals were held either in the school's regular concert hall or in the gymnasium if the hall was too small. By the 60s, the association became so large that both afternoon and evening performances were held. Each choir presented ten to fifteen minutes of repertoire. At the conclusion of the festival the guest clinician led the combined choirs in a combined choral work, all the singers ended the evening with a rousing rendition of "Gaudeamus Igitur", and adjourned to a dance or other social event planned for all the festival participants. The clinician's written comments were presented to the choir's conductor after the festival.

Today the Pacific Southwest Intercollegiate Choral Association has thirteen member institutions. Each school is usually represented by its largest mixed voice concert choir. The host school's director serves as the association president and selects a nationally recognized choral musician to serve as the festival clinician. An executive secretary monitors association business and financial matters. The directors hold an annual luncheon meeting to discuss both choral matters and association business. Following the meeting, an afternoon clinic is presented by the guest adjudicator. Each choir may send an octet to that clinic. Warm-ups for the festival commence at 4 p.m. The festival starts at 6 p.m., with the order of each school's performance chosen by lot. After the cheers and groans from this process have died down, the festival begins, the tradition continues. In the words of the old college song, "Gaudeamus Igitur": 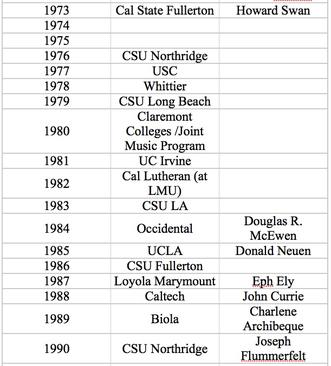 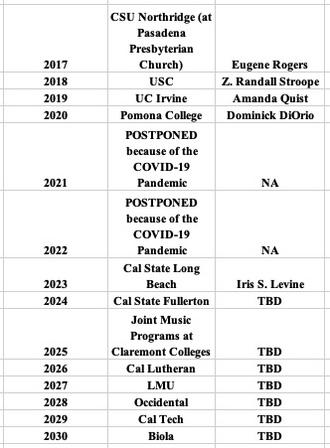 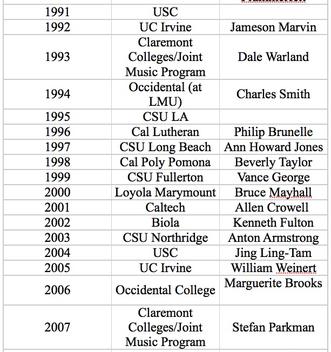 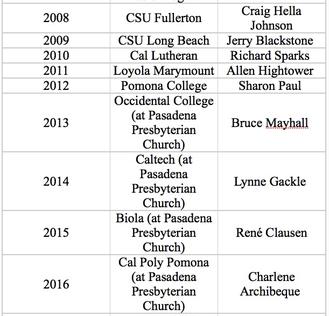 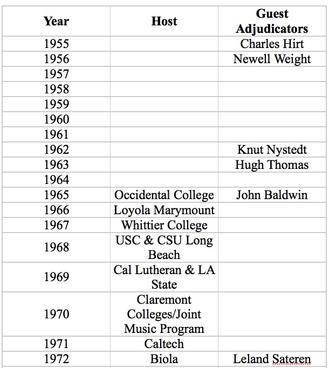